The Zionist power over the U.S. Government in Washington, D.C. stems from the Zionist/Bolsheviks centered in New York City.

It is from New York that orders go out to the vast Zionist network all over the U.S. — a network that influences the economic and political affairs of not only our federal government, but nearly all, if not all, state governments, and to a great extent the governments of the larger and even medium sized cities.

This power of the Zionist/Bolshevik Jews over the U.S. makes the New York leg of the New York/Moscow/Tel Aviv Triangle a tremendous influence over communist policies.”–Jewish author Jack Bernstein

The Zionist terror organization survives by using Jewish people as a shield.  The strategy has worked so well, that for most people in the western world, even thinking about whether they oppose or support Zionism makes them uncomfortable.

“We do have a problem and that is that the Zionists have made themselves to appear as the representatives and spokespeople of all Jews and, with their actions, arouse animosity against all Jews…

The whole idea of a Zionist State is a flawed concept and is the underlying cause of the strife in the Middle East.

As Jews, we are ashamed of our brethren who have followed the Zionist path and we wish to state that Zionists do not in any way represent the Jewish People as they would like to have the world believe.”
– Rabbi Ahron Cohen

“Satan is constantly changing his disguise and sending his agents to entrap the Jewish masses in his net, so that they throw the yoke of the Torah off their necks.
The names of these agents change every few generations. Today, they are called “Zionists”.    – Rabbi Yisroel Hager 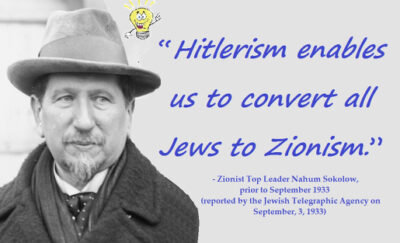 Jews who are aware of the truth about Zionism are completely opposed to it.

Even at the highest levels, the builders of the Zionist machine are under the deception that the world will be theirs.
It won’t.

They will be discarded just like everyone else they are using. Those at the top of the pyramid are useful idiots too.

The biggest mistake people often make, once they discover what is being done to the world, is to begin attacking Jews.
Justice can never be achieved by perpetrating injustice.

Jews are not responsible for the attacks on every nation and the overthrow of every government, Zionists are.
There are over 15 million  Jewish people in the world, and only a few thousand involved in the Zionist plot.
And essentially fewer than 300 who know the full scope of it. 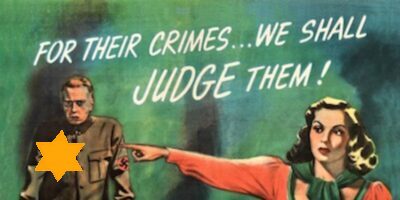 The Zionists no more represent Jews than Black Lives Matter represents black people, than ISIS represents Syrian people, than the CIA represents Americans, or any other small Marxist terrorist organization represents any race or any nation of people.
For decades religious Jewish leaders have been trying to alert the world to what is taking place, but they are given no platform, and no one can hear them. Zionists own nearly all global media.
Many groups such as True Torah Jews and Jewish Voice for Peace are actively working to raise awareness and expose the Zionist lies and tyranny.
Jewish people are among the primary victims of the Zionist plot and have suffered for centuries from deliberately created anti-Jewish sentiment against them, caused by Zionist usurious banking practices and subversion of governments, or caused deliberately by Zionist direct attacks on Jewish people such as terrorist bombings  or the murder of Jewish political opponents like anti-Zionist Yaakov Yisrael Dehaan.

In the words of Zionist leader Yitzhak Greenbaum:
“One cow in Palestine is worth more than all the Jews in Europe.  I think it is necessary to state here – Zionism is above everything.”
The Big Lie that the Zionist machine uses to cover up the hundreds of millions of murders and countless other crimes it has committed, is that anyone who notices is an anti-semite, a “racist,” or “bigot.”
Since a bigot is defined as “a person unreasonably attached to a belief based on prejudice, or a person who is obstinately or intolerantly devoted to his or her own opinions and prejudice,” this means that, in fact, those who DO NOT oppose Zionism are bigots, as they blindly and without knowledge or information support the most violent and ruthless terror organization in world history.
The Zionist terror organization survives by using Jewish people as a shield.  The strategy has worked so well, that for most people in the western world, even thinking about whether they oppose or support Zionism makes them uncomfortable.

Blind support for “Israel” has been portrayed as the epitome of virtue and most people have never spent even a single minute considering why they support “Israel,” how that support came to be, or who exactly “Israel” is in the first place.
Opposition to Israel is portrayed as the ultimate form of hatred and injustice.
They will censor this site and accuse it of racism, because in typical Marxist-speak the exact opposite is true. The purpose of this site is to end the worldwide oppression of all people on earth, including Jews by the world’s only terrorist organization.