Britain and the United States worked together to kill the Bahrain revolution of 2011 and its people’s long-held aspirations for democratic governance. 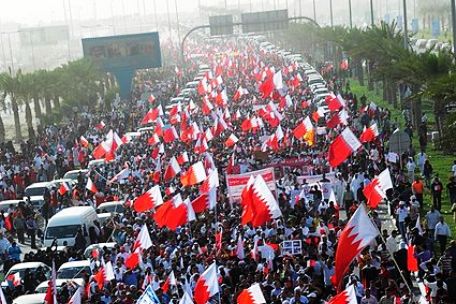 “When Britain and the United States talk about promoting democracy and human rights in places like Hong Kong, Venezuela, Russia, or anywhere else, just remember their bankrupt credibility as proven by Bahrain.”

Ten years ago this week, the Bahraini people launched a daring, peaceful uprising against a despised and despotic monarchial regime.

During the next four weeks, the Al Khalifa regime was rocked to its shaky foundations as hundreds of thousands of Bahrainis took to the streets of the Persian Gulf island state.

What followed, however, was a crucial – if despicable – intervention by Britain and the United States which unleashed a wave of brutal repression – a repression that continues to this day.

Without this British and American operation, the Bahraini regime would have fallen to a popular uprising.

At stake for London and Washington was not just the tiny island of Bahrain itself but the stability of the entire chain of Persian Gulf monarchies, principally Saudi Arabia.

The Gulf sheikhdoms are essential for maintaining the geopolitical interests of the Western powers in the Middle East, for propping up the petrodollar system which is paramount to American economic sustenance, and prolonging lucrative trade for British and American weapons manufacturers.

If Bahrain were to succumb to a democratic uprising by its people demanding free and fair elections, independent rule of law, more equitable economic governance, and so on, then the Gulf monarchies would be “threatened” by example.

Saudi Arabia, Kuwait, the United Arab Emirates, Qatar and Oman are the other Gulf states which are ruled over by monarchs.

They are all clients of Western powers, facilitating American and British military bases across the region which are vital for power projection, for example prosecuting wars and confronting designated enemies like Iran.

Bahrain hosts the U.S. Navy Fifth Fleet base as well as a new British naval base that was opened in 2016. In short, Bahrain could not be allowed to attain democracy as that would have a domino effect across the entire region jeopardizing U.S. and British interests.

The democratic aspirations of the Bahraini people are poignantly apposite.

The majority of the indigenous population are followers of Shia Islam with many cultural connections to ancient Iran which lies to the north across the narrow Gulf sea. The Bahraini rulers descend from a colonial settler tribe which invaded the island in the 18th century.

The Khalifa tribe hailed from the Arabian Peninsula originally. Their occupation of Bahrain was one of conquest and pillage.

Unlike most Bahrainis the usurpers professed to following Sunni Islam and held the native population in contempt, lording over them and imposing arbitrary, extortionate levies under pain of death.

But the British Empire constructed the new rulers into a monarchy in 1820 in order to perform a sentinel duty over the island in a key waterway leading to Britain’s imperial jewel in the crown, India.

The British Empire had similar protectorate arrangements with all the other Gulf Arab territories.

Down through the centuries, British colonial officers and soldiers were relied on to enforce the Khalifa regime in Bahrain.

Uprisings by the people would recur periodically and would be violently suppressed by British security forces.

The pattern was repeated during the 2011 Arab Spring revolts which swept across North Africa and the Middle East.

Some of these revolts were manipulated or fomented by Western powers for regime change, such as in Syria and Libya.

But in Bahrain, it was a truly democratic impulse that galvanized the Shia majority to once again demand their historic rights against what was viewed as an imposter, despotic regime.

Such was the regime’s shaky hold on power that the tide of popular uprising nearly swept it aside during the four weeks following the beginning of the Bahrain uprising on February 14, 2011.

This author was present during this tumultuous time which saw up to 500,000 people take to the streets – nearly half the population.

Pearl Roundabout in the capital, Manama, became a de facto “Republic of Bahrain” with peaceful encampments and daily throngs defiantly telling King Hamad bin Isa Al Khalifa that it was “game over” for his crony regime.

It was a heady time and the regime’s imminent perilous fate was palpable. Plunging the people into a bloodbath would be the escape route for the rulers and their Western sponsors.

On March 14, 2011, thousands of troops from Saudi Arabia and the United Arab Emirates invaded Bahrain and began a bloody repression against unarmed protesters.

People were rounded up for mass-detention and torture. Young men were shot dead at point-blank range.

The vicious repression that began a decade ago continues to this day – albeit ignored by Western news media.

All of the Bahraini pro-democracy leaders languish in prisons without due process. Several prisoners have been executed for alleged terrorist crimes after “confessions” were beaten out of them.

Only days before the Saudi-Emirati invasion of Bahrain, on March 9, 2011, the regime was visited by senior British and American security officials.

On the British side were Sir Peter Ricketts, the national security advisor to then Prime Minister David Cameron, as well as General Sir David Richards, the head of British military.

In a second separate meeting, on March 11, three days before the onslaught, the Khalifa regime was visited by then U.S. Secretary of Defense Robert Gates.

We don’t know the details of those discussions but media reports stated at the time that the British and Americans were “offering their support for the royal family”.

Britain and the United States worked together to kill the Bahrain revolution of 2011 and its people’s long-held aspirations for democratic governance. The repression goes on with British and American officials frequently visiting Bahrain to express support for the Khalifa regime.

Former U.S. Secretary of State Mike Pompeo visited the island in August 2020 and fawned over the regime for its support to Washington’s policy of normalizing ties with Israel.

There is no sign of the new Biden administration taking a more critical position towards Bahrain.

Indeed it was the Obama administration in which Biden was vice president that colluded with Britain in the slaughter of the Bahraini revolution back in 2011.

Thus, when Britain and the United States talk about promoting democracy and human rights in places like Hong Kong, Venezuela, Russia, or anywhere else, just remember their bankrupt credibility as proven by Bahrain. Western news media – despite their claims of freedom and independence – also deserve condemnation.

Those media have steadfastly ignored the plight of Bahrainis in deference to their government’s geopolitical interests.

A follow-up commentary on the Arab Spring events 10 years ago will look at how the United States and Britain hypocritically and disingenuously moved to intervene in Libya and Syria at the very same time that these powers were suppressing the legitimate pro-democracy movement in Bahrain.