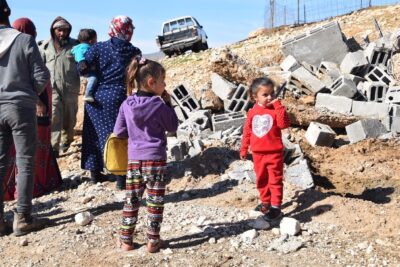 Some of these Palestinians are elderly, some are parents, and most of them own land. The one thing they do not have, which Israel makes sure they never will, is building permits. As they cannot build legally, these residents are forced to live in uncertainty, under constant threat that their homes will be demolished, their water and power supplies cut off, and their livelihoods taken away. Build another room to alleviate crowding in your home? The Civil Administration will swiftly tear it down. Lay a pipe to carry water from a spring to a field? The Civil Administration will soon slash it. Add a classroom to the community school? It will be destroyed. Install a toilet donated to the community to improve hygiene? It will be confiscated. Build a tabun oven to bake bread? Forbidden. Put in a solar panel to generate a bit of electricity? Not allowed.

Hoekstra pushed back at Israel’s designation of the Palestinian NGO Al-Haq as a terror organization by meeting with the group in Ramallah.

“Ambassador [Han] Docter would be pleased to reaffirm the Dutch position during the regular meeting with the Israeli Ministry of Foreign Affairs,” the Foreign Ministry at The Hague stated on Thursday.

Hoekstra’s introductory one-day trip to Jerusalem and Ramallah, his first since taking office in January, was designed to help tighten Dutch ties with Israelis and Palestinians.

The Al-Haq visit, however, overshadowed the trip, creating a contentious diplomatic situation between two otherwise strong allies. The upcoming Foreign Ministry meeting with Docter was characterized as a summons, whereas The Hague downplayed it as a regularly scheduled event.

It said that “Docter was not summoned,” but rather planned to go to the ministry for a prearranged meeting that he himself had requested to discuss support to Israeli and Palestinian NGOs.

“Ambassador Docter would be pleased to reaffirm the Dutch position during the regular meeting with the Israeli Ministry of Foreign Affairs,” the Dutch Foreign Ministry said.

Dutch Foreign Minister Wopke Hoekstra meets with U.S. Secretary of State Antony Blinken (not pictured) at the State Department in Washington, US, April 14, 2022. (credit: EVELYN HOCKSTEIN/REUTERS)“This topic has also been discussed in-depth and in all transparency between Dutch FM Hoekstra and Israeli FM Lapid,” it explained.

Donor support to Israeli and Palestinian NGOs is a regular topic of conversation between the two governments, the Dutch Foreign Ministry said.

“The Israeli MFA indicated that they would like to address it again during an already and earlier planned meeting between the Dutch ambassador and the MFA that was requested by the ambassador, as one of the items on a broader agenda,” said the Dutch Foreign Ministry.

“You have to look at the facts here,” Hoekstra said. “There isn’t a single European state – nor the United States – that has arrived at the same conclusions as has Israel.

If there is proof, then we should see and we should review it. An accusation in and of itself can never be sufficient for a country that subscribes to the rule of law.”

The Netherlands had an indirect financial relationship with both Al-Haq and DC-IP.

Hoekstra later clarified that “the Netherlands takes terrorist allegations” with the utmost seriousness. “Because of this, the government asked Israel to provide additional information on the listings to define” its “own position on this. The information we received was carefully assessed.”

Hoekstra said that when it came to these six NGOs, “the information that was provided to the Netherlands was not sufficiently detailed or specific to justify the [terror] listings and to attach consequences to them or our cooperation.”

The former Dutch government cut funding to one of the six groups – the UAWC – at the start of January during its last days in office. The Dutch Foreign Ministry clarified that this was done based on “the outcomes of an independent and external review.”

Hoekstra said that the Netherlands held NGOs to high standards and would always hold them “accountable,” but only if the “severe accusations” made against them are “backed up by proof.”

Representatives of the Palestinian NGO Musawa and two left-wing Israeli NGOs, Breaking the Silence and B’Tselem, were also at the meeting with Hoekstra.

Al-Haq said it appreciated “the important and timely meeting” with Hoekstra “to discuss human rights and civil society work in Palestine.”

While in Israel, Hoekstra visited Yad Vashem and met with Lapid in Jerusalem.

After his meeting with Lapid he wrote, “The Netherlands and #Israel share an historic friendship and we have close political, economic and cultural ties.”