In the blink of an eye, the Adwan family watched their home get destroyed by Israeli air strikes in May 2021. A year on, Israeli restrictions have stopped them from rebuilding

They sought refuge in a camp in the city of Rafah, adjacent to the Palestinian-Egyptian border in the far south of the Gaza Strip.

Adwan grew up in the alleys of the Barbara camp, which got its name from the original village that was abandoned by the Adwan family and other families that settled together.

“We were neighbors in Barbara before the Nakba, and here we are in the camp until the return,” Adwan, now in his late 70s, told Arab News.

Today he is the mayor of his village (the chief of the refugee families from the village of Barbara), and despite spending his life as a refugee, he still believes in the right of return.

“We will return one day, and if we pass away, our children and grandchildren will return and rebuild the country.”

Estimates by the UN Relief and Works Agency for Palestine Refugees show that the number of refugees in the Rafah camp grew from 41,000 in 1948 to more than 125,000 today.

Residents in one of the largest camps in the Gaza Strip live in overcrowded houses in narrow streets.

In Gaza, refugees represent more than 70 percent of the population of almost two million people.

Displacement has driven the modern history of the Gaza Strip, a 360-square-kilometer territory on the eastern Mediterranean. The Strip was part of Mandate Palestine’s Gaza subdistrict but became an administrative and political unit after 1948. The Nakba not only established the Gaza Strip’s contemporary borders but also initiated its modern history as the site of continual Israeli displacement policies, which began in the late 1940s and continue to this day. 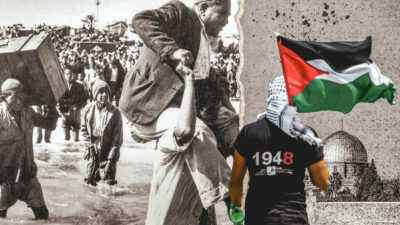 Adwan uses a large map of the village of Barbara, which tops one of the walls of his meeting hall in his home, to describe the village he visited for the last time about 35 years ago.

He classifies his constant talk of Barbara, and the refugee stories linked to the memory of the Nakba, as a “kind of resistance” in order to keep the memories of past generations alive and encourage the restoration of stolen rights.

He said: “Today’s generation is more aware than their parents and grandfathers than the generation of the Nakba, and the experience of the Nakba in 1948 cannot be repeated again.”

Mohammed Adwan, born in 1970, is a freed prisoner of an Israeli jail.

He said: “The camp is the storehouse of the revolution since the Nakba, and the fathers and grandfathers are its fuel by constantly talking about Palestine with all this nostalgia.”

He added: “We will return sooner or later.” Adwan said that refugee camps play a role in “resisting the occupation, forming the awareness of successive generations and preserving the national memory.”

He added: “It was important to preserve the names of our original towns and villages, by calling them to the refugee camps, as this is a resistance to the factors of time, and the occupation’s efforts to falsify reality and distort Palestinian geography.”

#OngoingNakba
74 years of oppression and perpetration of massacres against us in #Palestine , the year 1948 is not the only year when Nakba happened, but in fact is the beginning of the Nakba, the last Nakba against us a few days ago in #SaveMasaferYatta against +1000s of us https://t.co/Em2dSAELaL

The growing population in the camp led to mixing with city neighborhoods.

Simple houses built from brick and roofed with asbestos have largely disappeared, replaced by concrete houses.

A researcher in refugee affairs, Nader Abu Sharekh, said that stories told in the homes of the camps, generation after generation, have made the Palestinian cause “alive and growing.”

The families of each village and city destroyed in the Nakba gathered in neighborhoods inside the new camps to draft names.

They used original names from their homeland, out of love for the land and adherence to the right of return, and to keep the names and meanings present in memory.

In each camp there are streets bearing the names of original homes.

“In the camp, the events of the Nakba are present, and the right of return is an absolute belief,” Abu Sharekh said.

“In wedding parties, they sing historic songs from before the Nakba like Ataba, Mijna, Dabke and Dahia.

“These traditions remained in circulation, so that the homeland remains a title to joy, and the right of return remains in the refugees’ diaries.”

People have allotted part of their yards to plant something that reminds them of their lost orchards and farms.

Sometimes the space is used to construct a hut or tent.

Some of the refugees still bake using traditional clay ovens modeled on the kind lost in their destroyed towns and villages.