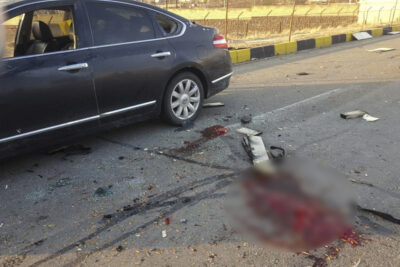 This photo released by the semi-official Fars News Agency shows the scene where Mohsen Fakhrizadeh was killed in Absard, a small city just east of the capital, Tehran, Iran, Friday, Nov. 27, 2020. Fakhrizadeh, an Iranian scientist that Israel alleged led the Islamic Republic’s military nuclear program until its disbanding in the early 2000s was “assassinated” Friday, state television said. (Fars News Agency via AP)

Iran said, this week, it will soon put on trial what it said were three Mossad-linked agents arrested in April amid simmering tensions between the Islamic Republic and arch-foe, Israel, which has been waging a shadow war in the Middle East for years.

A prosecutor said the three detained men were planning to assassinate nuclear scientists.

Iran has long accused Israel, which the Islamic Republic refuses to recognise, of sabotaging nuclear sites and killing scientists to disrupt its nuclear programme.

The West and Israel fear Iran’s programme is aimed at producing weapons, which Iran denies.

Here are some details of attacks on Iranian scientists and other figures in recent years:

Two people on a motorcycle open fire on Revolutionary Guards Colonel Khodai in Tehran on 22 May. Although Khodai was not involved in Iran’s nuclear programme, Israel accused him of plotting attacks against its citizens worldwide.

His death was the latest in a series of what Iranian officials say are Israeli attacks. Israel does not comment on such incidents.

The semi-official ISNA news agency reported that members of an Israeli intelligence service network were arrested by the Guards. Tehran blamed Israel and vowed revenge.

Top Iranian nuclear scientist, Mohsen Fakhrizadeh, was killed in an ambush near Tehran in November of 2020. A senior Revolutionary Guards commander said the killing was carried out remotely with artificial intelligence and a machine gun equipped with a “satellite-controlled smart system.”

Shortly after his death, Iran pointed the finger at Israel, with the Foreign Minister alleging “serious indications of (an) Israeli role”.

Israel neither confirmed nor denied responsibility.

Fakhrizadeh had been described by Western and Israeli intelligence services for years as the mysterious leader of a covert atomic bomb programme halted in 2003, which Israel and the United States accuse Tehran of trying to restore. Iran says its nuclear programme is solely for civil uses.

Ahmadi-Roshan, a 32-year-old chemical engineering graduate, was killed by a bomb placed on his car by a motorcyclist in Tehran in January 2012. Another passenger died in hospital and a pedestrian was injured.

Iran said the victim supervised a department at the country’s underground Natanz Uranium Enrichment Facility. Iran blamed Israel and the United States for the attack.

Rezai, 35, was shot dead by gunmen in eastern Tehran on 23 July, 2011. The university lecturer had a PhD in physics. Deputy Interior Minister, Safarali Baratlou, said he was not linked to Iran’s nuclear program after early reports in some media said he was.

Alimohammadi, an elementary-particle physicist, was killed in January 2010 when a bomb hidden in a motorcycle exploded.

Western sources said the professor worked closely with Fakhrizadeh and Fereydoun Abbassi-Davani, who were both subject to UN sanctions because of their work on suspected nuclear weapons development.

An Iranian man pleaded guilty to the murder of Alimohammadi. Prosecutors said the man had travelled to Israel to receive training from the Mossad intelligence agency, and was paid $120,000.

Nuclear scientist, Shahriyari, was killed and his wife was wounded in a car bomb blast in Tehran on 29 November, 2010, in what Iranian officials called an Israeli or US-sponsored attack.

Iran’s Atomic Energy Agency chief, Ali Akbar Salehi, said Shahriyari had a role in one of the country’s biggest nuclear projects, but did not elaborate, the official news agency, IRNA, reported.

Abbasi-Davani and his wife were hurt in a car bomb blast on the same day as Shahriyari was killed.

Abbasi-Davani, who was head of physics department at Imam Hossein University, had been subject to UN sanctions because of what Western officials said was his involvement in suspected nuclear weapons research.

The Intelligence Minister at the time, Heydar Moslehi, later said: “This terrorist act was carried out by intelligence services such as the CIA, Mossad and the MI6.”