Evidence that came to light after Israel removed its gag order on information regarding the June 12 kidnapping and murder of three Jewish Israeli students suggests that it was  an Israeli government operation that was intentionally used to punish Hamas and break up the new Palestinian unity government.

Israeli Prime Minister Benjamin Netanyahu had immediately accused Hamas of the kidnapping — without presenting any evidence — and proceeded to “conduct a search” throughout the entirety of the West Bank until the bodies were reportedly found on June 30th.

The “search” entailed arresting and beating up about 600 Hamas members (including legislators) and trashing about 2100 homes; Israeli forces killed at least 7 Palestinians.

Israel also heightened its daily air strikes on the Gaza Strip, which has been under the Israeli blockade since Sept. 2006.

The Gaza government appealed to the UN for relief, which responded by condemning the kidnappings rather than the massive abuse of the Palestinian population. And then urging “all parties” to show restraint.

On July 1, Israel removed a gag order on information about the kidnapping that revealed shocking facts: 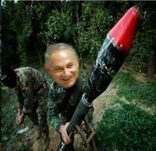 The Israeli government is continuing to harass and attack Palestinians until it supposedly finds the killers.

The two young Hebron men named as the accused have been missing since June 12th.

The uncovering of this deception should arouse world condemnation.