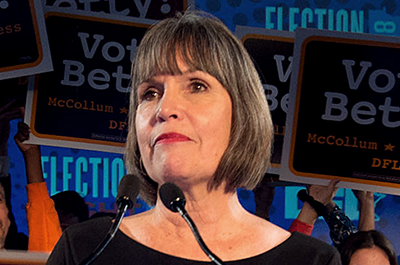 Gulp…she really said this? And still has a job? The head still attached to the body? “Congress must stop ignoring the unjust and blatantly cruel mistreatment of Palestinian children and families living under Israeli military occupation.” Ah…no one gets away with calling ‘israel’ an occupation…we need to keep an eye on her. And if she doesn’t get called out by the Zionists, then we can assume they are losing power.

Congresswoman Betty McCollum (DFL-Minn.), released the following statement today after introducing the Defending the Human Rights of Palestinian Children and Families Living Under Israeli Military Occupation Act, building upon legislation she introduced in the 115th and 116th Congresses to promote the human rights and safety of Palestinian children.

McCollum’s legislation prohibits Israel from using U.S. taxpayer dollars in the Occupied West Bank and East Jerusalem for: the military detention, abuse, or ill-treatment of Palestinian children in Israeli military detention; to support the seizure and destruction of Palestinian property and homes in violation of international humanitarian law; or, to extend any assistance or support for Israel’s unilateral annexation of Palestinian territory in violation of international humanitarian law.

“U.S. assistance intended for Israel’s security must never be used to violate the human rights of Palestinian children, demolish the homes of Palestinian families, or to permanently annex Palestinian lands,” McCollum said.

“Peace can only be achieved by respecting human rights, especially the rights of children, and this includes the U.S. taking responsibility for how taxpayer-funded aid is used by recipient countries, Israel included.

Congress must stop ignoring the unjust and blatantly cruel mistreatment of Palestinian children and families living under Israeli military occupation.”

“I strongly believe there is a growing consensus among the American people that the Palestinian people deserve justice, equality, human rights, and the right to self-determination.

It is time for Americans, especially Members of Congress, to stand with Palestinians and Israelis who seek a future of peace and justice.”

Legislation: The full text of the bill can be found here.