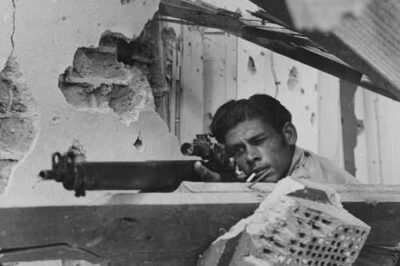 An Israeli military sharpshooter intentionally shot and killed Al Jazeera correspondent Shireen Abu Akleh and injured her colleague while they were clearly identifiable as journalists, according to a new investigation.

The findings of the investigation, which includes previously unseen Al Jazeera footage, were published by the UK-based research group Forensic Architecture and Palestinian human rights organization Al-Haq on Tuesday. Abu Akleh’s family submitted a complaint to the International Criminal Court over her death that same day.

Forensic Architecture and Al-Haq’s decisive conclusions contradict Israel’s claim, echoed by the Biden administration in Washington, that Abu Akleh was not killed intentionally. Last week the US State Department spokesperson Ned Price told reporters that Abu Akleh’s death was “the tragic result of a gunfight in the context of an Israeli raid in the West Bank.” 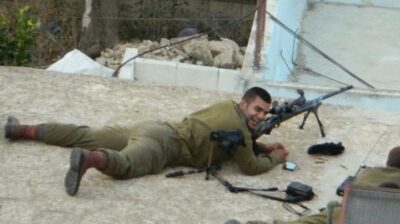 The targets is Palestinian children in Gaza who are playing outside

“Shireen and her colleagues were explicitly targeted, despite being identifiable as members of the press,” according to the investigation.

Abu Akleh, 51, was among a group of journalists covering an Israeli raid in Jenin in the northern West Bank in the early morning of 11 May.

A spatial analysis undertaken as part of the investigation shows that the journalists, who wore helmets and vests identifying them as press, were fully identifiable as such from the vantage point of a convoy of Israeli armored vehicles some 200 meters away.

As the group slowly approached the Israeli position, and without prior warning, “the first burst of six bullets was fired at the journalists through a sniper hole in the front military vehicle,” according to Al-Haq.

“Journalist Ali Samoudi, who was leading the way, turned around and screamed ‘bullets being fired’ and started running back when he was struck by one of the bullets in his left shoulder,” the rights group added.

Moments later, a second burst of seven shots was fired at the journalists, hitting Abu Akleh in the head as she attempted to take cover by standing against a wall.

A third round of fire came from the Israeli position two minutes later, as a civilian named Sharif Azab attempted to come to Abu Akleh’s aid.

Forensic Architecture and Al-Haq “undertook an extensive drone survey to reconstruct a precise 3D photogrammetry scan of the scene.” They also located all cameras that captured footage of the shooting within the model and “located the precise positions of the journalists at important points throughout the incident.”

The investigators also “identified and reconstructed the precise position of the Israeli forces” and “identified the armored vehicle from which Shireen was shot” by a marksman using an optical scope mounted on an assault rifle.

Researchers “simulated how Shireen and the other journalists would appear from the marksman’s position 190 meters away.” The model shows that “the journalists’ press vests would have been clearly visible.”

“The journalists were clearly identifiable as such,” researchers found. Abu Akleh was shot with “her press vest in full view” of the sharpshooter.

“The proximity of the shots,” including four that hit a tree shielding some of Abu Akleh’s colleagues, “confirms a professional marksman repeatedly and explicitly targeted the journalists.”

All of the shots “were aimed above the shoulders and intended to kill,” according to the investigation. 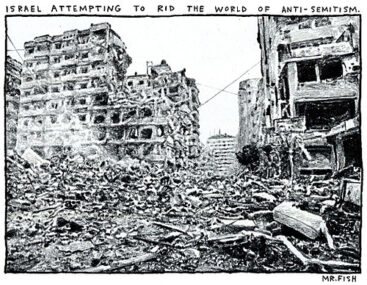 Footage analyzed by investigators shows that no other persons were between the journalists and the convoy of Israeli armored vehicles and there were no armed persons near Abu Akleh and her colleagues.

Sound analysis confirms that the only shot fired in the three minutes before the shooting of Abu Akleh came from the Israeli position.

“No other shots in any of the footage analyzed came from the vicinity of the journalists,” investigators found. “The slow movement of the journalists” towards the Israeli position before the latter opened fire “supports the assessment that there were no other fighters nor was there any crossfire at the time of the incident.”

The investigation is the most thorough yet after several independent probes similarly found that Abu Akleh was more than likely killed by an Israeli soldier, with CNN indicating that she was deliberately targeted.

Al-Haq states that the shooting of Abu Akleh amounts to an extrajudicial and willful killing, “a grave breach of the Fourth Geneva Convention and a war crime under the Rome Statute of the International Criminal Court, giving rise to individual criminal responsibility.”

Israel determined ahead of the conclusion of its military’s self-investigation that no soldier would face criminal charges for Abu Akleh’s death.

The family of Abu Akleh, who was a US citizen, has pressed Washington to open an investigation into the journalist’s killing. 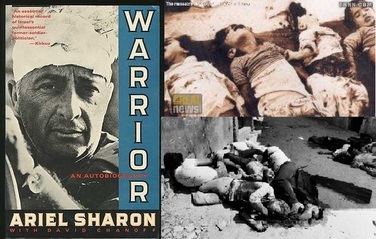 The Biden administration insists on deferring to the Israeli military’s self-investigation mechanisms, long discredited by human rights advocates as whitewashing operations aimed at deflecting international scrutiny rather than securing justice for Palestinian victims.

The US has pressed Israel on reviewing its rules of engagement, only to be rebuffed by Tel Aviv, with Prime Minister Yair Lapid insisting that “no one will dictate open fire regulations to us when we are fighting for our lives.”

Like the US, the European Union is apparently satisfied with Israel’s superficial self-investigation into Abu Akleh’s death.

“EU countries are planning to drop calls for an ‘independent’ inquiry into the shocking killing” of the journalist during a meeting with Lapid next month, EUobserver reported on Monday.

The EU foreign service had proposed to say in a declaration accompanying the high-level EU-Israel Association Council meeting that the body “reiterates its call for a thorough and independent investigation that clarifies all the circumstances of Shireen Abu Akleh’s death, and that brings those responsible for her killing to justice.”

Instead, it now plans on delivering a watered down version in which “the EU reiterates its call for a thorough investigation … and that those responsible are brought to justice.”

Lawmakers in Washington continue to press the Biden administration to launch an independent probe, with senior Democratic senators introducing an amendment including “unprecedented language calling on the US to see ‘whether section 620M of the [Foreign Assistance Act] applies’ to Abu Akleh’s case within 180 days,” as the Tel Aviv daily Haaretz reported.

The amendment refers to the 1997 Leahy Law that prohibits the US from providing military assistance to units of foreign militaries when there is credible information that those units violated human rights with impunity.

However, as Haaretz notes, it is not clear “how the Leahy Law would operate in practice given how foreign military financing to Israel is legally stipulated” by US Congress at a floor of $3.8 billion per year.

Senator Chris Murphy, who cosponsored the amendment, told MSNBC news personality Mehdi Hassan that while he doesn’t currently support the conditioning of US aid to Israel, “all of us are watching the behavior of the Israeli government very carefully.”

Abu Akleh’s case is an exception to the nearly blanket impunity with which Israel kills Palestinians.

Around 90 Palestinians have been killed in the West Bank by Israeli soldiers and settlers so far this year. It is the deadliest year in the territory since 2015, when around 100 Palestinians were fatally injured.

Around a third of those fatalities this year were in the Jenin area, which has been subjected to daily raids like the one in which Abu Akleh was killed after a wave of attacks in Israel beginning in late March.

Only a handful of Israeli soldiers have faced criminal charges over the death of a Palestinian in recent years.

In one of those rare examples, Border Police officer Ben Dery was sentenced to nine months in prison in 2018, four years after shooting and killing Nadim Siam Nuwara, 17.

Dery was initially charged with manslaughter but ultimately convicted of a lesser crime of “negligence and causing severe bodily harm” after taking a plea deal.

Like in the case of Abu Akleh, Forensic Architecture was tapped by Defense for Children International-Palestine to conduct a spatial and video analysis to determine the soldier who shot and killed the teen.

And like Al-Haq, Forensic Architecture’s partner in the investigation of Abu Akleh’s killing, Defense for Children International-Palestine was designated as a “terrorist group” by the Israeli government late last year, along with four other prominent Palestinian nongovernmental organizations.

Israeli forces raided and sealed the offices of those organizations in the area of Ramallah, the seat of the Palestinian Authority in the West Bank, during August. 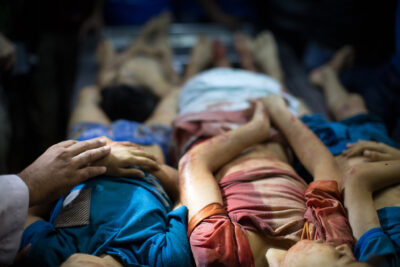 Last week, Forensic Architecture and Al-Haq published an analysis of CCTV and other footage available showing the raid on the latter’s office, which included breaking into an Episcopal church located on the floor below.

The footage shows that during the raid, which lasted more than an hour, soldiers rummaged through files, broke into the IT and server room and the office of Shawan Jabarin, Al-Haq’s general director, and other departmental offices.

Soldiers are also shown in the footage socializing and taking trophy photos and posing for selfies.

“With knowledge of the CCTV cameras, these actions deliver a message of humiliation and dominance over the premises,” Forensic Architecture and Al-Haq state.

Soldiers cut off power in the building some 40 minutes into the raid, shutting off the indoor CCTV cameras, before welding a metal plate to the door and posting a closure order.

Al-Haq staff have been subjected to harassment campaigns including death threats over their work pursuing accountability at the International Criminal Court.

Al-Haq and Defense for Children International-Palestine, along with Addameer, another group proscribed by Israel last year, have provided evidence to The Hague court’s probe in Palestine, which was launched in March last year.

The US opposes the ICC investigation in Palestine.

State Department spokesperson Ned Price stated that the Biden administration does not believe that the ICC is “an appropriate venue” for an investigation into Abu Akleh’s killing. Yet during the same press briefing, he said the White House welcomed The Hague court’s investigation of war crimes in Ukraine.

During his visit to Israel and the West Bank in July, Biden pledged that Washington would work with Tel Aviv to “combat all efforts to boycott or de-legitimize Israel, to deny its right to self-defense, or to unfairly single it out in any forum, including at the United Nations or the International Criminal Court.”