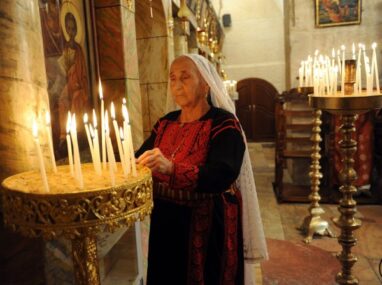 In Palestine, Muslims and Christians have been hand in hand resisting against the Israeli occupation.

Palestiniana in Israel Christians have a special relationship with the holy land of Palestine for it is the birthplace of Christianity.

They have been living in Palestine since the time of Jesus for over 2000 years.

Cities such as Bethlehem and Nazareth hold major importance, not only for Palestinian Christians, but for Christians all around the world as Bethlehem is the birthplace of Jesus in Christianity.

Since the creation of the state of Israel in 1948, Palestinian Christians have been subjected to brutal military occupation in their homelands.

Israel does not differentiate between Palestinian Christians and Muslims when it carries out its occupational policies.

As a result of Al Nakba in 1948, Al Naksa in 1967 and many other wars on the Palestinian people, the majority of Palestinian Christians have been forced to flee and seek refuge in neighbouring countries and abroad.

Bethlehem is dominated in equal measure by churches and mosques, a symbol of the increased diversity of the region’s people.

Since 1948 many Palestinian Christians have been living in refugee camps outside the sacred city.

The Christian population in Bethlehem now stands at a mere 28% of the total population.

Just as other Palestinians they face many challenges moving from one city to another due to Israel’s Apartheid checkpoints.

It is virtually impossible for them to travel to the Gaza Strip which is home to some of the oldest Christian holy sites in the world.

Likewise, Christians living in Gaza face many obstacles when traveling to Bethlehem or other holy cities in the West Bank. Since Shalit’s capture by the Palestinian resistance, only 20% of Gazan Christians who apply for permission are issued permits.

People between the ages of 16-36 years are not allowed to travel due to security measures implemented by Israel .

Palestinian residents of Bethlehem are all subjected to the same military occupation.

A representative from the Centre of Political and Development Studies (CPDS) had the opportunity of visiting the Church of Saint Porphyries.

The church which is located in Saha Area, Gaza city was built approximately 1600 years ago and is the oldest of its kind in Gaza.

A mosque by the name of Kitab Wiliya stands directly next to the church. The only thing that separates the two places of worship is mere thin wall. The church is administrated by the Greek Orthodox Patriarchate of Jerusalem.

For this reason the Palestinian Christians have sacrificed a lot to keep the Birthplace of Christianity protected and preserved.

In the fifth century, St Porphyries came to Gaza and built a church.

It took him five years to build it and he got the financing from Constantinople.

Today the St Porphyries church stands as one of the oldest churches in Gaza.

St Porphyries himself was buried inside the church.

His tomb and icon are still inside the church.

Israel has been trying to portray the Palestinian issue as a “Muslim Versus Jew” conflict.

However, this is not the case. I conversed with a Palestinian Christian in Gaza and put forward some questions concerning the role of Christians throughout the long history of conflict. The Interview went as follows:

How do you feel when you know that there are Christians that support Israel?

A: They are Christian Zionists not Christians. Jesus taught to forgive, love your enemy and to carry on the brother hood in the whole world.

They are not true Christians.

How is your relationship with the Muslims in Gaza, do you both want freedom for Palestine?

A: Of course. In Palestine, Muslims and Christians have been hand in hand resisting against the Israeli occupation.

We are Arab and Palestinians. We share the same feelings and suffering from the Israeli occupation. So we work together.

How do you perceive the Palestinian cause?

A: Thanks for this question. I don’t like it when people talk about Islamic holy sites and forget about Christian ones.

There are also many Christians living in the area of East Jerusalem.

You have to talk about Palestinian Muslims and Christians together.

Palestine Christians expect from their fellows all over the world to stand by them to free Palestine, so that all people of Palestine, regardless their religion can pray peacefully for a better tomorrow.

Israeli Professor Nurit Peled-Elhanan said in a speech, “Israel has reached an unimaginable peak of evil. And indeed many people all over the world find it hard to imagine that this is so.”

Who could imagine Jewish thugs, wearing black boots and helmets, armed with guns and batons, lashing dogs at small children and old people, or letting asylum seekers die of thirst in the desert and prisoners die of hunger strikes, punishing them and their families by sending them to confinement;

who would conceive of Jewish doctors driving a wounded man out of hospital and letting him die of thirst on a deserted road, who would think of Jewish soldiers breaking the neck of a young girl with a pink scarf for protesting against oppression.

Who could imagine the education of Jewish girls as consisting of beating up and harassing women and children, or a Jewish soldier girl receiving a badge of courage for murdering a Palestinian boy who went to fetch his birthday cake.

The only possible conclusion must be that Israeli evil has nothing to do with Judaism and that what is manifested in Israeli behavior is not Jewishness. “