The Biden administration has repeatedly called on Israel not to expand settlements in land Palestinians claim. But Israel’s new government has said it will continue settlement activity. It sees other issues, especially Iran’s nuclear program, as being at the top of the agenda with the U.S.

Hanna Bisharat built his house in Jerusalem in 1926 for his large family (pictured in black and white). After they were expelled during the Nakba, Golda Meir, the PM of Israel who declared “there were no such thing as Palestinians” stole this home and used it as her residence. pic.twitter.com/suuD3yxxoC

The owners of the shops, located in Qalansuwa and Taybeh cities, were handed eviction notices under the pretext of building on residential plots of land, not for use as commercial property. 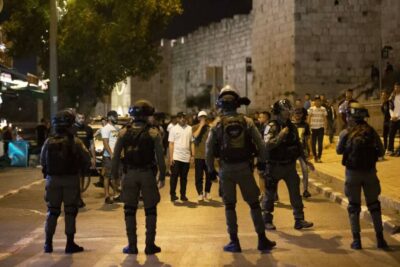 Palestinians responded to the bigotry and violence of settlers under the protection of armed Israeli soldiers by rallying in the streets and trying to prevent the settlers from accessing Damascus Gate.

Did you know that Palestinians in Jerusalem are mere “residents” in our ancestral city and that our “permits” to stay on our land can be revoked for, say, “breaching allegiance” to the regime that is systematically displacing our people and destroying our lives?
Exhibit A: https://t.co/Y1RiZpIOdg

Abdel Rahman Abdel Qader, one of the threatened shop owners, told Arab 48 that;

These eviction orders are considered a disaster for the shop owners. We are talking about dozens of shops on which the committee can impose fines of hundreds of thousands of shekels.”

We are holding continuous sessions with all responsible authorities, municipality, law offices, and specialists, as well as consulting with activists of popular and national action.”